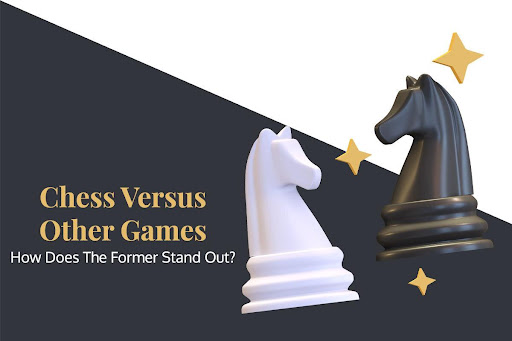 Chess Versus Other Games – How Does The Former Stand Out?

As you know it today, the game of chess was born before 600 AD from the Indian game Chaturanga. Over the coming centuries, the game spread throughout Europe and Asia. By the 16th-century, it had started evolving, and one of the first masters was Ruy Lopez, a Spanish priest. Therefore, chess history is rich and pretty interesting. Compared to other games, chess stands out because of its long history and the reasons explained below.

The First Game To Be Played Online Was Chess

The OG of online gaming is chess. It was one of the first applications on a computer and the first game people played online.

Do you want to know something more fantastic? It was also the first game ever played between space and Earth. Wondering how that’s possible? It happened when two Russian cosmonauts played a match against ground control in 1970. What’s more, they had a zero-gravity chessboard.

Can you say this about any other game you are currently playing? Did not think so!

The Gameplay Is Exciting

Gameplay is king in the gaming world. Even if you are playing games with great storylines and fantastic graphics, the experience might not match up to moving the sixteen pieces in chess.

At an elementary level, gameplay refers to how a game interacts with the users. A few factors go into fantastic gameplay, and chess hits all of them. For instance, the game offers good playability by striking the right balance between reward and challenge. Also, there are several tools to help players improve their skills.

Fair pairing is a no-brainer because players cannot make illegal moves. Players need to stick to the game’s rules. Hence, everybody gets a fair chance, and there’s no way gamers can cheat or resort to fraudulent activities.

Do you enjoy playing games where the outcome depends on your skills and abilities? If so, chess is perfect for you.

Games of chance or luck can also be fun, but they can break your heart. These games are based on chance, and there are possibilities of having an entire day of bad luck where you keep losing miserably. But nothing of that sort happens with chess. You might lose one match against your opponent, but you can win the next match if you understand your mistakes and employ different tactics.

The outcome depends on your knowledge, skills, and the strategies implemented. So, luck doesn’t have a role to play. The match depends on the moves you decide to play to put your opponent in an uncomfortable position. Therefore, it is a different kind of dopamine rush when you beat your opponent. You know the game is won because of your hard work and abilities.

The Chessboard And Pieces Are Visually Appealing

If you have played Assassins of Creed or Age of Empires, you might argue that appealing visuals in chess are a fool’s argument. However, if you forget about 3D graphics and unrealistic representations, you will see the beauty and elegance of a simple chessboard. The design of the sixteen pieces on the board and how they move. The game is an art, so it takes people a while to master it.

When you are playing the next generation of Pokemon or an action-based game, you are spending hours training to make your character in the game stronger. But the moment you turn off your console, computer, or phone, all your hard work will disappear and go down the drain. You cannot use the strength of the game’s character in real life to accomplish anything. Therefore, all your efforts are only within the match and not applicable in real life.

Even though looking at your monsters or characters level up and gaining new abilities might be satisfying, you are not genuinely gaining anything. On the other hand, you get stronger, faster, and sharper whenever you play chess. You are developing skills and learning lessons that can be applied to various aspects of your life.

Also, playing chess sharpens the mind, and you might find yourself much more attentive and alert than before.

Chess challenges you to engage in intellectual battles with your foes and friends. It brings everyone together because people can have a great time sitting around a chessboard. The game is as enjoyable to watch as it is to play. Whether you are playing offline or online matches, it can bring people together, and it can be great fun for everyone.

Chess Is A Timeless Game That Has Transcended Time

Chess takes the spot as one of the oldest board games, and the last time that game had any meaningful changes to its rules was more than 400 years ago. You can compare this to the other online games globally and see that none of them hold a candle to this beautiful game.

There are multiple games available online, and they might be faster and more visually appealing than chess. Still, the latter stands out as one of the most prevalent and intellectually stimulating games. The game teaches players skills that can be implemented in real life, and the outcome depends on the sole ability of the players.

If you have never played chess, you must download and install it to understand why people are going gaga over this straightforward game.

SHARE ON
TwitterFacebookLinkedInPin It
#Chess Versus
The Tech Wide