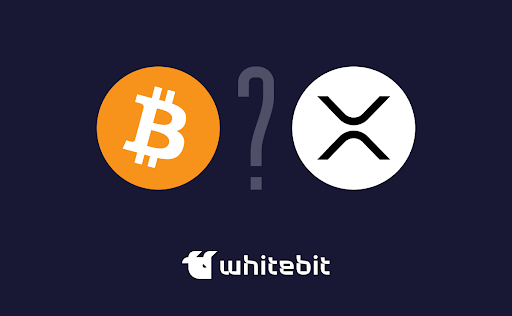 Bitcoin vs. Ripple: An Overview

Despite the popularization of digital currencies, many people only know one cryptocurrency: Bitcoin. However, the world of cryptocurrencies is very versatile. There is a vast number of different coins with a variety of goals, purposes, and characteristics. Those who want to diversify their portfolio can turn their attention to a few more popular cryptocurrencies that offer a slightly different concept from Bitcoin. This list includes Ripple (XRP). Let’s figure out the main features and differences between XRP and Bitcoin.

Bitcoin (BTC) is a fully decentralized cryptocurrency that operates in a peer-to-peer network that allows users to send and receive Bitcoin without intermediaries. Bitcoin has the largest capitalization with the largest market share and remains the most popular, expensive, and influential digital asset.

You can often see XRP and Ripple used as synonyms, but this doesn’t seem right. Ripple Labs is a company based on the Ripplepay payment system launched in 2004. In turn, XRP is a Ripple’s token based on the blockchain development XRP Ledger. XRP is an internal currency for products developed by Ripple Labs used for payments, asset exchange, and money transfers. xrp price today is $0.44.

Ripple Labs abandoned mining and issued 100 billion coins at once, 80% of which remained at the company’s disposal, and another 20% was distributed among the co-founders. Each coin is divided into 1 million particles. Transactions are charged a fee of 0.00001 XRP, which is later burned to reduce the total number of coins in circulation.

The creators of Ripple cryptocurrency initially aimed to improve the global payment system and wanted to compete with systems like SWIFT used by banks and financial intermediaries.

Critical differences between Bitcoin and Ripple

Bitcoin and Ripple have several differences between them:

Instead of the familiar concept of mining on the Bitcoin blockchain, Ripple uses its own consensus mechanism, in which participating nodes conduct a survey to verify and confirm transactions. Thanks to this, confirmations are obtained almost instantly and do not require the participation of a central authority.

Thus, XRP works more reliably and faster than its competitors while remaining decentralized. It also solves the problem of excessive power consumption inherent in BTC.

XRP is faster and cheaper than BTC

The complex and resource-intensive mining process leads to transaction confirmation in the Bitcoin network taking quite a long time and includes high fees.

In turn, XRP transactions are carried out quickly and cost very little. Users are charged a small amount of XRP as a reward for processing a transaction on the Ripple network.

There are more XRP assets

At the moment of the network launch, the leading investors mined one billion XRP coins, which were later released to the market. However, the number of Bitcoins is limited to 21 million.

In many ways, it is the concept of an artificial shortage of BTC that experts consider to be the main reason for the high interest in Bitcoin cryptocurrency investing.

Bitcoins are added to the network by miners who use their computing power. There is no release schedule, and the number of Bitcoins mined depends directly on the network’s speed and the coin-mining algorithm’s complexity.

The issuing of XRP is controlled by smart contracts. The announced plan implies that Ripple will issue a maximum of 1 billion monthly tokens. The current circulation is 55 billion tokens. At the same time, the remaining (unused) part of the XRP is transferred back to the escrow account every month. This mechanism has been implemented to prevent the excess of currency. Thus, it will take a very long time before all the XRP is circulated.

Bitcoin vs. ripple : For a better understanding of the principles of BTC and XRP, let’s draw an analogy with real-world calculations using traditional finance.

For example, John, living in Germany, goes to Aldi and pays for his purchases with Euros. John can also sell and invest Euros or buy another currency and sell it later to make a profit (depending on the market situation). Bitcoin is an alternative to the Euro or the US dollar. John can use Bitcoin to buy something, exchange it for another cryptocurrency, or invest it. Precisely the same as with any fiat currency.

If John, being in Germany, wants to send 100 Euros to Adam in America, he can use the services of a German bank for this transaction. John’s bank will transfer funds to Adam’s US account utilizing the SWIFT system. At the same time, this process includes high fees on both sides and will take up to several days. On the other hand, the Ripple payment system has its own XRP currency. John can instantly exchange the same 100 Euros for XRP and transfer them to Adam’s account on the Ripple network.

After the transaction is confirmed by the Ripple network, Adam will receive XRP equivalent to 100 Euros. After that, Adam can swap XRP for any currency convenient for him or leave them on his account. The process takes much less time than with the Bitcoin network or traditional payment systems, and the fee is also much lower.

As you can see, a direct comparison of these two cryptocurrencies does not make it possible to draw any obvious conclusion. Having similar goals, BTC and Ripple are pretty different from each other.

Ripple has a more complex operating principle, but in terms of speed and cost of transactions, it is better than Bitcoin. At the same time, BTC is more common globally and has an advantage over XRP.

Do not forget that the cryptocurrency market is notable for its volatility. The choice of cryptocurrency for investment should be your personal decision based on in-depth analysis and market research.

SHARE ON
TwitterFacebookLinkedInPin It
#Bitcoin vs. Ripple
The Tech Wide