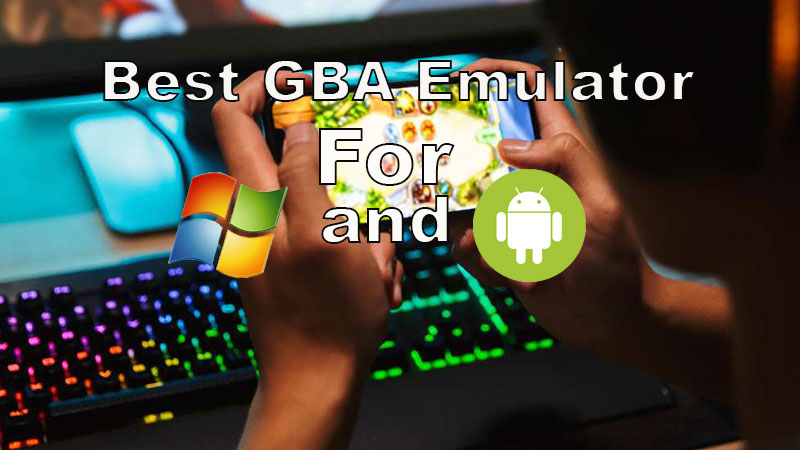 10 of the Best GBA Emulators for Windows PC and Android!

Game Boy Advance or GBA is a globally acknowledged video game console! Well, with this, I am sure your ‘lots of memories’ have just flash backed in front of you. So, how about reliving those days without getting away from your Windows PC?

Let me guess, you must be definitely ‘In’ with this plan! But, if you’re wondering how then, let me tell you that GBA emulators for PC are perhaps the best options for the same!

It’s more than a decade ago when the Game Boy Advance (GBA) handheld console was released, and no-brainer it was quite popular at that time. Eventually, the production of this gaming console stopped, leaving no scope for gamers to carry a portable game player and play games as and when they wish.

Well, that’s not the case anymore! All thanks to those programmers who invented the ‘Emulator’ technology, we all can still enjoy the bliss of playing those good old GBA games with GBA emulators.  How cool, isn’t it!

Knowing that, you all will definitely plan to look for the best GBA Emulator for your PC or Android but when you do so, you might get confused as there are a lot of options available!

However, you don’t have to worry about the same. I have already compiled a list of the best GBA emulators so that you can use the ones that are functional and have some advanced features –of which you can take advantage when it comes to enjoying the utmost gaming experience on both your android and Windows PC.

So, start reading to decide upon best and free Game Emulator to download on PC | Android for playing Game Boy Advance Games.

[Note: The below-listed GBA Emulators work great for playing Game Boy Advance on PC and Android as they are ranked in our top-10 list according to their usability, compatibility, UI and much more!]

The first on the list I have is VBA-M. This emulator was launched as a replacement for the well-known VisualBoyAdvance, which was discontinued in 2004. It’s a kind of VisualBoyAdvance’s new version that has been branched out after being improved by other developers.

To be precise, it’s a very powerful emulator that practically lets you play all the Nintendo’s famed GameBoy devices. It works as a dynamic emulator that supports all the original GB (Game Boy), GBC (Game Boy Color) and GBA (Game Boy Advance) ROMs!

Well, in addition, VBA-M offers plenty of other interesting features and let me tell you the popular games you’ll be able to play on VBA-M includes: Pokémon, Metroid, Zelda, Resident Evil, Castlevania, Final Fantasy, and, Super Mario of course,  whose more than 12 titles are available there.

All in all, VBA-M is perhaps the best portable gaming emulator option for Windows users. With this, you’ll definitely be able to enjoy 1000+ classic Nintendo games for Game Boy, Game Boy Advance and GameBoy Color during a hundred-thousand hours of fun!

The next top choice in the list of GBA emulators is No$GBA. Albeit, it was started as a Game Boy Advance debugger but later, released as a normal emulator that offers support for Nintendo DS emulation along with GBA games! It means you can play both Nintendo DS/Lite portable and GBA games on this particular emulator.

Well, not many are aware of the fact that No$GBA is the very first Game Boy Advance emulator to feature multiplayer. Yes, even before Rascalboy Advance!

More interestingly, No$GBA, after many requests from fans, now began offering dedicated support for playing Pokémon Multiplayer for the GBA emulator. Besides these amazing features, this emulator also features a wide variety of customization for the sole motive of enhancing your gaming experience.

In short, No$gba is a complete game emulator package for your Windows computer to enjoy the best possible gaming experience during ‘Game Boy Advance and Nintendo DS’ play!

Another iconic emulator on the list of GBA emulators for PC is BatGBA. It is one of the oldest, lightweight and extremely compatible emulators that supports almost all new age ROMs without any difficulty. With BatGBA, you can easily play GB (Game Boy), GBA (Game Boy Advance) ROMs, and GBC (Game Boy Color).

Moreover, it is the simplest GBA emulator for PC that does not require any useless installations to render outstanding performance. Plus, it runs almost on any hardware with ease so, you don’t need to be a pro in using BatGBA.

And, besides being the simplest emulator in existence today, it also has all the required features to make it stand out of the crowd. So, that’s why BatGBA is undeniably on this list of best GBA emulators on whose performance you can blindfold rely upon!

Launched 8 years ago, this streamlined Game Boy emulator has been designed to work with older hardware systems of PCs without sacrificing on performance or experiencing any playback issues.

Notably, mGBA, similar to Visual boy advance— supports Game Boy, Game Boy Color and GameBoy Advance ROMs hassle-freely. In addition, this application revolves around its open-source nature, so users will never have to pay for downloading it on their respective devices. In fact, updates regarding it, generally take place on a regular basis without bothering you for the same.

Apart from this, it aims to be faster and more accurate than many other existing Game Boy Advance emulators. Also, at the same time, it believes in timely adding features that other emulators certainly lack!

So, overall, mGBA is one of the fastest and most advanced Game Boy emulators on the market that supports a humongous catalogue of GBA ROMs and other major game titles such as Pokémon series, Mario Kart series, Final Fantasy, and The Legend of Zelda series, etc.

The next Game Boy Advance emulator that has stood the test of time is none other than Boycott Advance. It is a highly optimized emulator that works virtually for Mac and all versions of Windows, starting from XP to Windows 10. Well, this is a kind of emulator for which you can use autofire for up to 5 keys in the game.

Also, you can run emulator applications on GBA ROMs available in ZIP, 7Z, RAR, and .gb file formats. Besides that, it allows automation of several moves in play, helping in completing achievements in the game.

And, it is worthy enough to mention that, it has an option using which you can record audio from the GBS games also. In fact not only audio, it can be used to record music, game and other dialogues from the game in formats like WAV and MP3, etc.

Above all, what’s more interesting to know about Boycott Advance is that it has an online version, which eliminates the requirement to download the application on your PC to run GBA games.

This emulator is unique from the aforementioned emulators because it has a paid licensing with both the advanced and standard emulation features such as on screen controls, which a regular console emulator must need to play GBA games.

Not only that, it has many in-built features to give impressive performance across all devices. With GBA.emu you can easily run any GBA ROMs that can be stored on your android phone in the form of ZIP, 7Z files, RAR, and even .gba files. Yes! GBA.emu is one of the top GBA emulators for not only Windows, but also for Android.

All in all, GBA.emu boasts about cheat code support, configurable on-screen touch controls using VBA-M-compatible files and support for hardware controllers. Thus, you can run your favorite GBA without any hassle on this terrific (paid) GBA emulator that totally justifies its pricing.

Moving onto the next promising Game Boy Advance emulator, My Boy is one of the fastest GBA emulators I have on the list.  It is hands down the most prominent android emulator and extremely popular in the android world for its terrific performance and over the top emulation qualities.

Albeit, its free version is enough for game lovers to play GBA games, but what mostly attracts users is –the full version of My Boy app that is completely ad-free and has visually appealing graphics.

Amongst the most notable feature of My Boy comes with an on-screen keypad. Wondering how? Well, unlike normal keypads, My Boy’s keypad comes with additional shortcuts that can help you to easily load and save your games, isn’t it amazing!

Another unmatched android GBA emulator on this list is ‘JohnGBA.’ This terrific emulator has plenty of astonishing features that work flawlessly with your GBA ROMs for offering high-quality graphics rendering.

Besides that, John GBA is one such emulator that comes with the original GBA engine, and it requires you to have your own ROM files to run the games. Additionally, it also comes with turbo buttons, customizable keys, and more for the ease of users.

Well, that’s not it! There is one more really cool feature in the John GBA emulator according to which you can play GBA games in fast-forward or slow down mode, how amazing!

Hence, this is one of the better GBA emulators that deserved to be on this list.

EmuBox is an all-in-one emulator application that offers impressive stability and reliable performance. Like other popular emulators, it offers many nifty features like— “cheat support, fast-forward support, save and load states.” Well, that’s primarily the best of the basics.

So, in short, EmuBox runs nearly all the GBA games without any hiccups. Furthermore, it supports the solar sensors, Gyroscope, and also the hardware sensors of your phone or computer to let you have the best gaming experience!

Last but not least, Higan is like an all-in-one emulator that is also referred to as a multi-system emulator for playing GBA games on PC.

Well, this particular emulator by nature is simplistic to its core, as it can run on almost all the hardware you throw at it! In fact, it offers so much ease that you can control the emulator however you want.

And, apart from having support for just GBA games, it is one such good GBA emulator that even emulates other game systems like the NES, SNES, Game Boy, GBC, Mega Drive, Game Gear, Wonderswan Color, SEGA Master System, Genesis, Super Famicom, Famicom, Wonderswan, and the PC Engine. So, despite the fact that Higan lets you play GBA games with ease, you can also use this emulator for playing aforementioned games.

Overall, what makes it a remarkable emulator option is that it offers a plethora of options, has the ability to smoothly run games and is compatible with different ROMs. So, definitely you won’t regret considering it as one of your options!

That’s it! With the huge variety of GBA emulators that are available out there on the internet, these following listed are some of the best feature-packed GBA emulators –you can use for playing GBA games on both your Windows PC and Android.

From the list, you can simply pick any emulator that suits your needs, taste and preference!